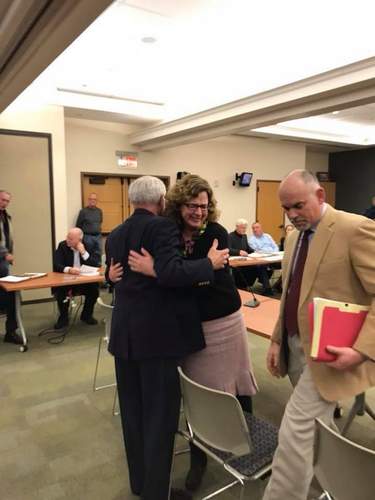 Branford — On January 10, with the town's final approval to appropriate $5,245,000 and authorize the issue of bonds to renovate and expand the James Blackstone Memorial Library, the final hurdle was cleared in a marathon that the Blackstone Board of Trustees has been running since 2012.

The town's decision to support the library's $5.2 million project came down to a close vote of 15 -11 of the Representative Town Meeting (RTM) following more than an hour of debate among representatives. The RTM decision ensures that a portion of the $5.2 million cost will be paid by a $1 million Connecticut State Library grant, together with a projected $800,000 or more generated by local donations to the Campaign for the Blackstone. The town will responsible for the rest, approximately $3.4 million.

Supporters of the Blackstone included the majority of those in a crowd of about 50 who turned out for the Jan. 10 decision. Several RTM members rose to speak in support of the Blackstone project. They noted factors including the Dec. 2017 unanimous vote of the Board of Finance to recommend the appropriation; a 3-2 vote of the RTM Ways and Means Committee recommending approval; and factors showing needed renovation/expansion to support growing and changing services at the library, as outlined in presentations prepared and presented to the town by the trustees. The trustees have been working toward the goal of expanding, renovating and updating the building and services since it first commissioned a call for input to a strategic plan in 2012.

Ahead of the roll call vote of the RTM on Jan. 10, several RTM members also spoke against approving the bonding. Opposition included concerns about adding to the tax payers' burden, especially given the uncertainty of future state budget impacts on the town. Others questioned the need to add a 2,000 square-foot building addition to one side of the library at back, in order to create a new main entrance giving greater accessibility to the building, at a cost of some $2 million. Others asked why the town's future Senior Center/Community Center (currently under construction) could not fulfill some of the needs outlined by the Trustees, such as additional meeting room spaces and computer stations. Others asked why the town should pay over 60 percent of the cost to renovate a non-town-owned building.

The night opened with panel discussion on the project and an update on outside funding, provided to the RTM by Blackstone Trustee president Andy McKirdy, Library Director Karen Jensen, State Library Director Kendall Wiggin, project construction manager David Heer (Downes Construction Co. Inc. New Britain) and project architect David Wenchell (Silver Petrucelli, Hamden). Branford Community Foundation (BCF) Executive Director Liza Petra also discussed the foundation's research and data-driven decision leading a $100,000 matching grant challenge issued to Campaign for the Blackstone in May 2017; the largest single grant issued by the foundation in its 37-year history. To date, approximately $90,000 of the BCF challenge grant has been met. The campaign for the Blackstone has raised $686,000 towards its $800,000 goal.

Following their input, the panel remained seated at the RTM guest speaker's table, listening in as RTM members debated pro and con for over an hour. When the approval came down by a roll call vote of 15 "yes" and 11 "no" at approximately 10 p.m. on Jan. 10, Jensen and McKirdy shared a jubilant hug.

"We are just beyond excited and so looking forward to actually making this a reality for everybody," said an emotional Jensen, speaking to Zip06/The Sound moments after the vote.

Jensen said the night's rollercoaster debate was not quite what she had expected, but added, "...I feel like the questions were answered. I have to thank all of the people in the audience, who are amazing."

McKirdy told Zip06/The Sound he'd anticipated the RTM vote would be a close one.

"We didn't know if we'd make it," said McKirdy. "I think what was so exciting was that as there was more conversation, even among RTM members, but particularly members of the public, who brought out, again and again, all the advantages that could accrue to the people of Branford. It really was the other people who were making that case – we didn't have much to say up at our table. That was what was great – it really showed it was the community themselves, and their representatives, who thought it was a good project."